The Historical Connection of Juneteenth in Georgia 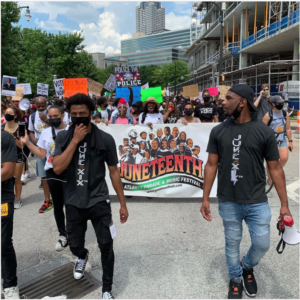 Georgia declared Juneteenth a state holiday 11 years ago, and the celebrations are only getting stronger.

But even 100 years before the national holiday, Georgia held its own celebrations to end slavery. In Upson County, Freedom Day was celebrated on May 29th, 1921, that’s the day its residents learned about the Emancipation Proclamation. People even traveled to the county to join the celebration.

“The Central of Georgia Railway ran four special coaches for colored people for this occasion, three from Macon and one from Atlanta,” wrote Rev. James McGill in his book, “The First One Hundred Years of Upson County Negro History.” Hosea Williams and Ralph David Abernathy were speakers at the gathering.

Still, Juneteenth becoming a national holiday was a milestone for many Black activists and historians. Nonetheless, a new goal for approving it as a paid holiday is being argued. There is hope that Juneteenth will be held with the same importance as the Fourth of July or Memorial Day.

Juneteenth Atlanta is a weekend-long event with a parade, music festival, a film review, vendors and more. The event was held at Centennial Olympic Park and had free admission.

Despite the heat, thousands of people gathered in downtown Atlanta to participate in the event. The event embodied different pieces of Black culture, including marching bands and handmade clothing.

Other celebrations across the state’s capital are conducted by the Atlanta History Center, Uptown Comedy Corner and National Center for Civil and Human Rights. But Juneteenth is not just a day for celebration. Many Black Americans hope the holiday pushes forward conversations about economic justice and reparations.

Cy Richardson with the National Urban League stated, “The Black homeownership rate today is about 42%, which is the same rate it was in roughly 1968. So, it gives you a sense of how we’ve gone two steps forward and one step back.”

The group utilized the holiday to highlight the lack of affordable housing homebuyers face. The collaborative set a goal to earn $3 million for the issue.

Atlanta Mayor Andre Dickens said, “We want to see families increase their income so they can have more homeownership and we also want to see banks lean into this opportunity.” 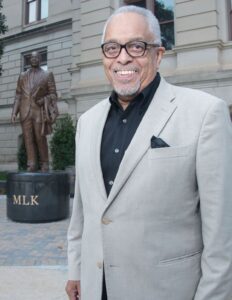 Legendary Atlanta reporter Maynard Eaton says he owes his journalism career to his father, Jack Eaton. Maynard recalls when he was growing up, his father would take him on his paper route on Sunday. That’s when the papers were the heaviest and hardest to throw across lawns in Newark. But before young Eaton could buckle up, his father would quiz him about the contents of the Sunday edition. “So he said, If I’m going to take you around your route, you ought to know what’s in that paper. so I had to make sure I knew what the news was to tell him while he was driving me.” Eight Emmys later, Eaton still calls that his first reporting job.

But for the father of four and stepfather, his own journey into parenthood came as he began pursuing a career as a television reporter. “Early on, I was not very good at it because I was pioneering as the only black person at certain stations in Miami particularly and in Atlanta subsequently.” Eaton says he tried his best to parent long distance with his eldest two children, but ultimately he had to mend those relationships after his children grew up. “We closed the gap. But, if I have any regrets. I wish I had been as good a dad as I was a reporter early on.” Now he encourages younger journalists to find that work-life balance. “Being a father counts much more than being. The best reporter in town.”

Outside of his own biological children and stepchildren, Eaton says he’s been able to mentor several of his students. “I’ve been able to teach this discussion for over well over a decade at Clark Atlanta University.” Eaton says mentorship is his calling card in journalism and that he loves to see the next generation carry on the torch.

This issue of the Byline was edited by Tianna Faulkner and Natalie Mendenhall.