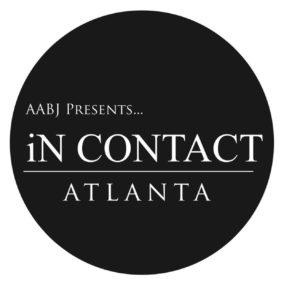 To date, it is the only African-American focused program within the Atlanta market. In fact IN CONTACT has expanded its reach beyond local borders. Through various international collaborations, IN CONTACT has traveled around the globe to bring viewers culturally relevant shows on South Africa, Jamaica, Barbados, Turks and Caicos, and Kenya. The show has touched on a range of issues impacting the African-American community, such as domestic violence, health disparities and environmental sustainability. Newsmakers on the program have ranged from former Atlanta Mayor Kasim Reed to seven-time Grammy-award winner Al Jarreau.

IN CONTACT has also been recognized by a variety of government and civic organizations including the city of Atlanta, and The National Rainbow Push Coalition.

Since its inception, IN CONTACT’s growth and success is linked to support from key alliances with individuals, corporations and local businesses

How can you help?
AABJ would appreciate your financial support for IN CONTACT. We also welcome your ideas and suggestions about additional ways we can partner with you.