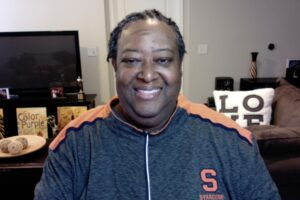 “I don’t care what they promise you. I don’t care what they say, unless it’s in writing—be weary of it. Whatever their promise is to you, get it in writing.” That’s the advice from Marcus Foster. He says it guided his 25-year career in journalism. “As journalists, we have to take people to places that they can’t go or don’t have access to.” Now, the WSB-TV’s Emmy-award-winning producer is offering you these tips on how to land your next journalism job.

Foster says that if you must sign a contract, request an updated version that includes the “promises” made and what happens if your outlet can’t deliver. He adds this is especially important for Black journalists, who may not have as many connections in the business. Foster was the first among his siblings to pursue a career in reporting, so he had to forge his own blueprint through trial and error.

Foster says don’t have a “plan B”, go for the job you want. He adds that people often come into journalism looking for ways to work themselves up, “That used to happen a lot back in the day,” Foster said. But in today’s newsroom, more young journalists find themselves trapped in entry-level positions. “The way we are now, people and newsrooms are doing more with less. When you’re hired as a camera person in the studio, then that is your job—there is usually no opportunity to come off your job and experiment doing something else.”

“If there is one thing I wish I could’ve done better as a student and young journalist, was networked, networked, and networked,” Foster said. He notes that the importance of networking and seeking a mentor helps when you need your ideas heard or help to get to the next level. Foster adds that when he first started out there weren’t a lot of black faces in his classes and ultimately the newsroom. “Being the Black male who went to college, wasn’t normal in my area,” Foster said. “It took awhile for me to come into myself being comfortable in the newsroom. When I started, I was the only Black male producer, sometimes only Black male, in the newsroom.” Now he hopes students and veterans alike can cultivate community in a more diverse landscape.

Similarly, his fourth tip considers the role of shadowing media professionals by which you are surrounded. “You need to introduce yourself to them. You need to find out what they are doing and become their shadow,” he said. Foster shares that it may seem intimidating, but it’s an opportunity for you to get experience.

Lastly, Foster encourages young journalists to start small to make room for growth. “I know everyone wants to be in a big city, but don’t get caught up in that; you’ll get there in time,” Foster said.

That’s what Foster did during his first job as a part-time photographer for the CBS station in Columbus, Miss. He spent his time driving from Oxford to Tupelo, back to Oxford. While covering sports and breaking news for northern Mississippi, he used that time to mold his career making mistakes along the way. “I’ve made a lot of mistakes and I’ve learned from those same mistakes. I think that’s a critical point in moving up and becoming solid journalists,” Foster said.

“You want to be able to be in places where you can learn and make mistakes and not get fired for those mistakes or worse, ruin your name in the business. Are you doing yourself justice by missing that opportunity to gain experience and work your way up?” ###.

REMEMBERING A RISING STAR AND FRIEND 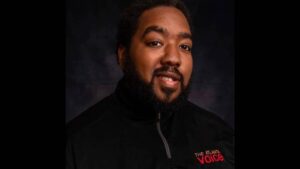 Just over a year after his death, AABJ remembers Marshall A. Latimore, who was previously the chief content officer and editor-in-chief of The Atlanta Voice newspaper. Latimore was an advocate of Black student journalists, a champion of HBCUs and a great friend. Janice L. Ware, Publisher of The Atlanta Voice and team members share their thoughts about Marshall and the great impact he had at the paper and the writers he worked with.

Marshall’s presence and influences will be a part of the transformation in our newsrooms for years to come.  He was instrumental in the current digital transformation of our company. God puts people in your way while you are on your way who are destined not to be a part of your journey. But you would never get to your destination if God had not placed them in your way. The Atlanta Voice Family is blessed that God put Marshall Latimore in and on our path. He will be missed in ways I cannot describe. He will truly be missed and celebrated.

Since Marshall passed there’s been this hole in my heart. He was one of the most thoughtful people I knew and I miss our conversations about life. Marshall had this ability to understand exactly what I needed every time I connected with him. He saw me in ways that made me feel whole as a person & highly respected as a journalist. In so many ways, Marshall’s death has changed the way I process losing a loved one and it has challenged me personally to love up on my friends as much as I can. His spirit was so beautiful and he was a creative genius that held space for anyone that gave him time to share his mind. Marshall is tremendously missed, our newsroom has not been the same and I will forever dedicate my career to him. I miss you Marshall.

My favorite and quite incredible memory of Marshall revolved around his insatiable appetite for information. Rarely did I ever ask Marshall about a subject he was not well-versed on.

It is not often that you meet a kindred spirit let alone work with one almost every day. Marshall Latimore, was such a person for me. There wasn’t much we couldn’t or didn’t talk about with regard to the world in which we live. And then to be able to dream about the future of our business and our industry and work tirelessly to make those dreams come true was truly an incredible blessing for me. I have often said God puts people in your way while you are on your way who are destined not to reach your destination with you. But there is no way you could get there if God had not put them there in the first place. I am so thankful He put Marshall Latimore  in mine. Rest easy Marshall and watch what your presence has meant to The Atlanta Voice and know that I am now even a firmer believer that dreams do come true with a little insight, grit, determination and focus, and a whole lot of imagination. Thank you for sharing yours with me. See you when I get there…”Listen!”

The Atlanta Voice is an African-American community newspaper serving the greater Atlanta metropolitan area. The paper is published weekly on Fridays. For more information about The Atlanta Voice, visit www.theatlantavoice.com.

This issue of the Byline was edited by Tianna Faulkner and Natalie Mendenhall.