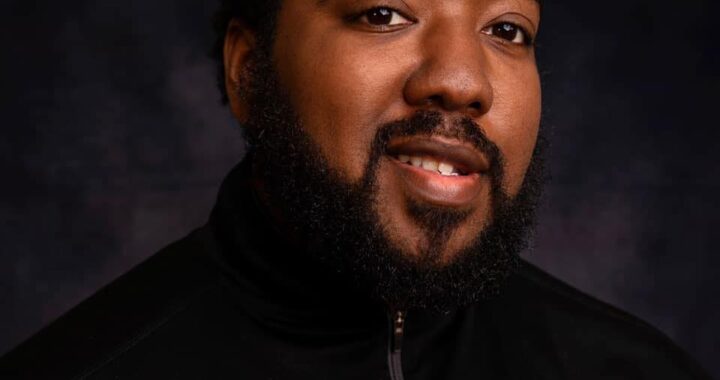 We are mourning the death of Marshall A. Latimore, chief content officer and editor-in-chief of The Atlanta Voice. Latimore was an advocate for Black student journalists, a champion of HBCUs and a great friend.
A graduate of Tennessee State University, Latimore, 36, has served as a page designer for Alabama Media Group, Gatehouse Media and the USA Today Network. He also served as the creative director for duGard Communications and HBCUStories Inc. and publisher and editor-in-chief of STAYONTHGO magazine.

A champion of the Black press, Latimore spent the last three years at The Atlanta Voice, developing young reporting talent and increasing the newspaper’s digital footprint.

“We at The Atlanta Voice are coming to grips with the sudden and unexpected loss of our Executive Editor and Chief Content Officer, Marshall A. Latimore,” Janis Ware, The Atlanta Voice publisher, said in a statement. “Marshall stood in the epicenter of this Atlanta treasure as we have transformed The Atlanta Voice into a multi-media powerhouse set to grow our legacy for generations to come. His loss is not only ours, his family and loved ones, but also our community’s. His leadership cannot be replaced but his direction will be followed as our mission continues to be a voice for the voiceless. His presence will be missed but his voice will continue on in every aspect of our future. Marshall was loved and cherished by all whom he met.”

Latimore was recently interviewed for the February issue of AABJ’s The Byline on the importance of the Black press and had this to say: “Our purpose is ensuring that the people who have been the most oppressed and disenfranchised have a voice and are able to tell their stories that are based on the truth.”

As a child, Nicole Carr was always talkative and curious. She would frequently try to listen to the conversations between her parents, aunts, and uncles.

At the same time, her heart was always in writing. She still has little books she wrote as a child that she would bind with yarn. But her very first news article would come when she was in the eighth grade when she wrote about Terence Roberts, one of the members of the Little Rock Nine, the first Black students ever to attend classes at Little Rock Central High School in Little Rock, Arkansas.

Roberts spoke to Carr’s class, and her teacher at the time asked her to write about it. From there, Carr’s interest in journalism piqued: The summer before 10th grade, she studied journalism at Cambridge for a summer prep program. She later attended Winston Salem State, where she served as editor-in-chief of the campus’ paper. Carr then attended Syracuse University, where she obtained her master’s degree in broadcast journalism. Soon after, she began her career as an intern at the Fayetteville Observer in Fayetteville, North Carolina.

“I liked talking to people. I liked finding things out. And so I think that is what kindled my interest in journalism,” Carr said.

But in between then, Carr’s life was filled with the news, driven in large part by her dad’s Army background. Because Carr grew up in a military family, she traveled to various places and was constantly exposed to essentially history in the making. She remembers TV cameras being around at a homecoming for her father’s unit as they returned from the African countries of Mogadishu and Somalia.

The movie “Black Hawk Down” was released, based on a mission her father was involved with in Fort Campbell, Kentucky. Carr said that most of her time spent with her father was consumed by them watching CNN, as her father always wanted to remain informed.

“Growing up, we were always in the middle of historical significance, and it always made me wonder ‘what’s going on?’” Carr said.

After working in Fayetteville, North Carolina, Carr moved to Wilmington, North Carolina, where she was able to get live reporting experience, such as covering hurricanes. She then moved to Atlanta to be a general assignment reporter for WSB-TV from WVTD in Durham, North Carolina.

“I wasn’t looking for a title, but I also knew that standing out and having some deeper reporting in a largely competitive newsroom could show that I could hang with the best of them,” said Carr.

Like many of her peers, Carr has faced many challenges as a Black journalist. One of the reoccurring issues she has dealt with is the perception of bias or being tone-deaf because of how she may speak on a particular topic.

“I think the perception of someone who looks like you handling certain stories might make people uncomfortable, for whatever reason,” Carr said. No matter how professionally she handles a story, there is always an assumption that her stance is somehow subjective. “We address problems by bringing attention to them.”

Carr said one of her proudest stories is of a lady who was billed $10,000 for a DNA test she hadn’t authorized. She was a mental health patient, and her doctor had forged her signature on the test. By the time Carr and the rest of her team had finished the story, the business was under a state investigation and shut down soon after. “I think that’s the power of journalists; we were able to expose something that no one was confronting,” she said.

Carr wants to be remembered as a truth-teller, whether that makes people uncomfortable, whether it helps people, whether there’s a fall out from it, or all three.

“I think truth is light,” Carr said. “We’ve gotten caught up in the way of both siding parts of our reporting that doesn’t require that. It requires us to plainly tell the truth that’s in front of us.”

When asked about her career goals within the next five to ten years, Carr explained she sees herself doing journalism differently. She wants to go back into the more in-depth storytelling. She aspires to be in a position that will allow her to take more time with her stories and delve into accountability journalism. She wants to write more and eventually work on documentaries.

To aspiring journalists, Carr says to remember there is no one way to achieve a goal. It is okay to admire people and study the methods used, but you also have to always do what is best for you.

“There was a time when they would teach women in television not to get married or have a family until you’ve gotten into your career,” Carr said.

While she understood where the advice came from, she acknowledged that wasn’t her path, and she has been able to have it all: a successful career and personal life. “If I stopped today, I’d say good job,” Carr said.

Kassidy Jack is a student at Clark Atlanta University.

JW: Can you explain the responsibilities of a digital marketing specialist?

KM: In my formal role as a digital marketing specialist, I was in that role as a social media marketer strategist and audience development. I spent maybe three or four years in that role at various companies. My experience was an all-hands-on-deck situation. People think that digital marketing is just email marketing and social media. There are so many facets to push people along your marketing funnel. It looks different for everybody. It depends on the service or product. For me personally, television required a lot of legwork. You had to work with teams that were knowledgeable about traditional out-of-home marketing. It is a project management team effort.

JW: What was the difference between being an audience development specialist and a digital marketing reporter?

KM: As a digital marketing reporter, I look at the marketing landscape. I see where people are investing their ad dollars, what is important to them as far as the marketing funnel and where brands are seeing the most success. As we are in a global pandemic, what’s the best ways businesses have been able to market to their consumers to keep your business thriving. An audience development specialist, I was on the opposite end of that. I used SEO, social media newsletters to make sure I am getting traction to the stories, videos and other digital aspects.

JW: How do you feel about social media encouraging an industry of marketing specialists? Do you think social media influencers are well-versed to share tips about marketing and passing it off as a way to quit your 9 to 5?

KM: I think it could be a bit misleading. I think when you have somebody who has success and doesn’t divulge how they got there then it can be harmful for people who are looking to you as an industry leader. If you’re a celebrity and you say “I am going to start selling a book about how to live your best life.” Well if you are not divulging that you have a makeup team, nanny, personal chef. I do think it’s a little misleading to encourage people to buy your product. Especially if you are pitching as a DIY and you are not telling people you had help along the way. It’s the same thing for social media marketing. I think oftentimes it waters down what a social media marketer or digital marketer is because there are unproven, debunked shortcuts that have been introduced. For example, buying followers or using this hashtag strategy and you will be able to gain followers by the morning. There’s nothing wrong with trying and testing different strategies it all depends on what your brand is and what you are trying to do. You have to take it with a grain of salt. Keep in mind that what works for someone else’s brand may not work for yours.

JW: What is one common theme you find within all social platforms?

KM: For journalists, I would say Twitter is a phenomenal help. As a content creator, I think Instagram is still pretty heavy. Tik Tok is kind of storming into that space so we will see. But, I think you are starting to see a rise in Clubhouse. There might be a space for a new type of influencer as social platforms continue to rise.

JW: What should journalists keep in mind when building their brand?

KM: The key for me has been just being extremely online. Including yourself in conversations, making sure you are making those connections, and don’t be afraid to talk to people. I don’t know how you are going to be a journalist and be afraid to talk to people. That’s step number one. You can be afraid to slide into someone’s DMs, quote tweet, retweet someone, or engage with them. Not even as a source but get your name out there and make sure you are staying on top of things. I think things happen in a digital space so quickly that if you’re not somebody that utilizes that digital space you will find yourself left out of conversation pretty quickly.

JW: What advice do you have for individuals wanting to be a digital marketing specialist?

KM: Put yourself in those spaces and make yourself available. Talk to the people in those spaces and connect with them. A couple weeks before I started this role, I was hosting coffee meetings where I would hop onto a Zoom or Google Hangout and just talk to people and let them pick my brain. It proved to be a very helpful space just talking and getting to know people throughout your career and I think that helps put a name with a face.

Jamila Wood is a student at Clark Atlanta University.

This issue of the Byline was edited by Raisa Habersham and Tianna Faulkner.