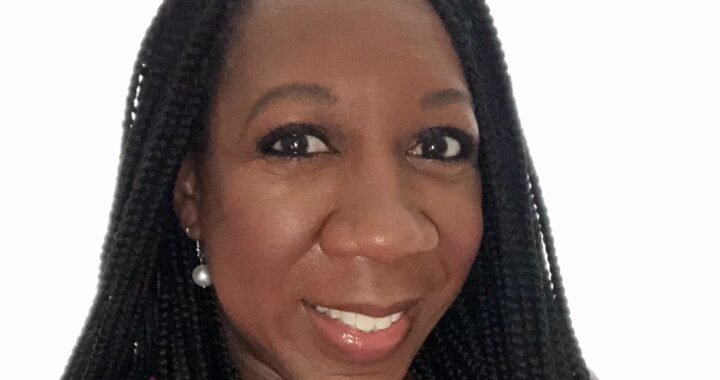 With Election Day fast approaching, long lines are already wrapped around early voting locations in Georgia — a state considered battleground territory this presidential election and one that has come under fire for rampant voter suppression.  The Atlanta Journal-Constitution’s Washington, D.C. reporter Tia Mitchell has a virtual front seat to all the action.

Mitchell came to the AJC in 2017 after covering crime, education, local government and state politics in Florida with various newspapers. As the AJC’s Washington correspondent, Mitchell covers Georgia’s delegation and national issues for a Georgia audience. The Byline spoke with her about the upcoming election season and the roll Georgia plays in it:

Q: What does this election mean for Black voters in Georgia?

out as far as immigration, policing, and racism. We should remember we have to pay attention up and down the ballot because yes, who is president matters, but the Congress members also matter. As voters, we have to decide which policy we like best and use that to inform us of who we want to represent us in Washington.

Q: How do you think we, as voters, should take time to learn about the candidates?

TM: It’s a personal responsibility and a civic duty. We talk about the “John Lewises” of the world and the Civil Rights leaders. We say we honor them. Well, John Lewis laid his life on the line many times for African Americans’ right to be able to vote. It wasn’t easy, we romanticize it, and now that Black folks have been voting for a generation, it’s easy to take it for granted. If we truly say we want to honor him and others, we’ve got to spend a little time doing our part. You have to take half an hour to google the candidates and see what they’re talking about. You have to take 15 minutes to tune into their debate or read articles about the race. You can go to the AJC or your local paper to see what’s being written about them. Take a minute and google them so you can see on their websites what they care about.

Q: How do you feel about Georgia being a purple state? What are some key races in Georgia? How does it feel that Georgia is a battleground state?

TM: It’s really interesting to see Georgia enter the conversation as a battleground state. I’m always skeptical because most of my career was in Florida, a battleground state. In the past 10 to 12 years, statewide elections have all been won by Republicans. For me, it’s harder to say Georgia is purple, but we cannot deny Georgia is purpling. We can’t deny how close Stacey Abrams got (to being elected Georgia’s first Black woman governor), but the question is: Is this the year a Democrat finally wins statewide in Georgia. Trends have to start with Democrats winning statewide to say that Georgia is a purple state.

Q: What are you covering election-wise right now?

Q: Are you expecting any surprises in this upcoming election?

TM: It’s hard to say because it’s so unpredictable. When I started in Washington, we were covering impeachment. We never thought we’d be writing about a pandemic. I don’t know if anyone predicted how competitive Joe Biden would be in Georgia. Things come up, scandals come up, and it’s just never what you would expect.

Q: Aside from being an AJC reporter, you’re also chair of the NABJ Political Task Force. How did you get started with the task force?

TM: In early 2019, one of the major news networks announced their political task force team, who will be covering the presidential race, and their team was all white. Everyone was coming for that network, saying their team had no diversity. NABJ, rightfully so, put out a press release saying the lack of diversity was a problem. And Marlon Walker, NABJ’s VP of Print at the time, told me to send him a proposal after I told him there was no action being done. And I said that’s what I get for opening my mouth. At the time, I was just a local government reporter, but I had a passion for politics.

It was always hard to get my foot in the door, even in NABJ, because there weren’t many political journalist opportunities. I saw there was a political task force, but they weren’t very active. I started reinvigorating the task force. We had elections, and that is when I was elected chair. I connect managers to our task force, who want a diverse staff.

Since then, we’ve had programs, webinars, and networking events in Atlanta. We share ideas, resources, best practices, and job openings. We’re currently increasing our board so more people can work on the task force.

Q: What tips can you give people who are engaging in political reporting

TM: For me, it’s two things. Some journalists have an ultimate goal, and everything they do is an incriminate step toward that goal. I am not one of those people. I’ve always been someone to look at the opportunities before me and either pursue it or don’t. I started as a night cops reporter right out of college. I tried it, enjoyed it, and got a local government job through my educational beat. I realized then that I liked political and government reporting. I wouldn’t have known that had I not tried it. One of my pieces of advice is to try it. Even if it appeals to you in a small way, try it. Take those opportunities that come before you because you never know what doors it’ll open. Take those opportunities but also make your opportunities.

Elisheva Wimberly is a senior at Georgia State University and a member of the school’s NABJ student chapter.

If you were to count the number of Black athletes on your fingers and toes, you’d probably wouldn’t have enough to finish the count. Black athletes comprise 74% and 70% of the NBA and the NFL, respectively. But when you look at other major sports, such as NASCAR and Major League Baseball (MLB), Black people are highly underrepresented.

On opening day this year, Black players comprise 7.8% — 80 players — of 30-man rosters, injured and restricted lists, according to an analysis by USA Today Sports. In NASCAR’s 73-year history, only two Black drivers have competed in the sport’s full Cup series: William Darrell “Bubba” Wallace and Wendell Scott, according to a Washington Post article about the lack of diversity in the sport.

Neely, a native of Charlotte, North Carolina, was introduced to the auto racing company after accepting the NASCAR Drive for Diversity Internship as an undergraduate student. Neely said she was not exposed to Nascar growing up, but was drawn to the sport while working as an intern.

After experiencing a positive work environment as an intern, Neely sought out full time employment with NASCAR. During her tenure, she was a part of discussions for NASCAR to remove the Confederate flag, which was steeply associated with the sport.

This past June, Wallace, the only black driver in NASCAR’s top racing series, publicly made a plea for the organization’s removal of the Confederate flag.

“I think even before that, when the George Floyd situation happened, we had come together as a company more so in a smaller setting on Zoom of course,” Neely said. “It was a NASCAR ally counsel, and I was excited to be a part of it.”

Cason was inspired to work within the sports field, after watching Atlanta Braves games with his mother growing up. The Atlanta native accepted a position with Fox Sports, which deepened his love of baseball.

“We did the Braves post-game shows, which led me to being in the locker rooms and eventually being able to travel with the team,” he said.

Both panelists work in sports industries typically not occupied by blacks. While both acknowledged the lack of diversity within their respective companies, they also emphasized the importance of representation needed within the spaces.

“I think the reason African Americans are not drawn to baseball, at least as of yet, is for one it’s slow, and it’s kind of boring to some people. There’s not alot of us that play baseball professionally, on (television),” Cason said. “If you don’t see someone that looks like you, you don’t have representation. You don’t relate to it. It’s also an expensive sport to play. Whereas with basketball and football you just need a ball and some friends. Baseball, you need a ball, bat, gloves, a big open field to play.”

Despite the challenges and accessibility of the sport, Cason said he hopes interest of baseball in the Black community will return.

“I know there’s a lot of programs to get young people more involved with baseball,” he said. “Baseball’s trying to promote the younger players. The Afro and Latino players are being promoted a lot. Hopefully more diversity, and people who look like us will start participating in baseball.”

Despite preconceived notions people have about the sport, Neely said NASCAR is working to attract more coverage that will lead to a more diverse audience, but she said there are challenges.

“African American media are not quick to cover NASCAR because of the stigma that is put on it. Things that people have heard about in the past, I do get those questions ‘Hey are there Confederate flags?’ ‘The people there, are they racist?’ I get those questions,” Neely said. “It’s really just a matter of seeing for yourself and coming with an open mind. That’s how we get new people to cover the sport.”

Througout October and November, AABJ is hosting series of digital workshops focused on repprting, podcasting and mental health. Be sure to check your email for the Zoom registration link for these upcoming events:

The National Association of Black Journalists is hosting its first-ever virtual, joint regional conference Nov. 21. Members can register for the daylong conference for $35. The registration deadline is November 18, 2020, at 11:59 p.m. ET.

This edition of The Byline was edited by Tianna Faulkner and Raisa Habersham.