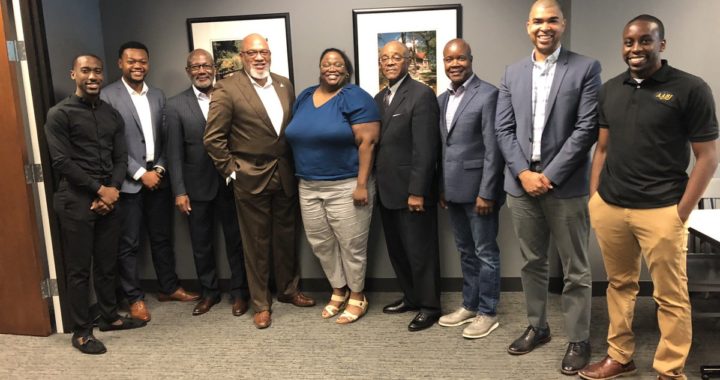 We are at the halfway mark of 2019, and we have accomplished so much! First, if you haven’t heard, AABJ’s documentary, “Black & Reporting: The Struggle Behind the Lens,” has been nominated for an Emmy! We are proud and extremely excited about this.  Thanks to AABJ member, Donell Suggs, the documentary is in the June edition of Atlanta Magazine.  If you have not purchased your copy, please do so today.  The monies go toward AABJ’s Xernona Clayton Scholarship Fund.

I want to thank each of you for your support thus far, but we still have more to do this year.  We are planning more workshops, community service projects, and fundraisers we need your help to make work.  We also need volunteers to help with our newsletter, The Byline and our public affairs show, In Contact.  In the coming month, we’ll be sending out a proposed revision of our bylaws.  It’s been over ten years since they’ve last been updated.  We will be voting on adopting them later this year.

Speaking of voting, if you or anyone you know have some interest in leading this organization, now is the time to begin thinking about a leadership role.  Our term will end this year with elections slated to take place in November 2019.  The nomination process will start in September.

AABJ’s $43 for 43 fundraising campaign is still ongoing. In its 43rd year, we are asking members to donate $43 to go towards programming, scholarships, and events throughout the year. Be sure to invite your friends, coworkers and anyone you know that supports our members in print, communications, public relations, radio, broadcast, digital and the many trailblazers in the literary world. Be sure to share our campaign on your social media by using the hashtag  #AABJ43.

Kendall “Kenny” Murray walked into a room of six black men working in media, unsure of how to approach them and nervous about how they would react to him.

That assumption, Murray said, was broken once he sat down with the six men during 10-minute sessions.

Discussions about the representation of black men in the media were all part of the Atlanta Association of Black Journalists’ (AABJ) Black Male Media Project on June 1.

The event  featured six guest speakers who discussed how they earned their management positions where they can make decisions on how black men are represented. It also featured a tour of WSB-TV led by former NABJ President Condace Pressley.

The event was part of a larger project, mandated by the National Association of Black Journalists,  designed to help change the narrative around the lives and images of black men in the news and in society through a series of workshops nationwide.

Drew Dawson, one of the guest speakers and station manager for Georgia Public Broadcasting, told Murray that it’s common to see news executives, directors, producers and other people who aren’t black in management approach stories, editing and decision-making from a eurocentric point-of-view. As one pitches stories, he said, the point is to take ownership of stories that are about your community.

“Your job is to position that story in such a way that will appeal to more than a black audience,” Dawson said.

But, Dawson also told Murray that one must watch for the “otherization” of minority groups.

“Sometimes, you’re going to be the only black person in the room, but it’s your job to find a way, before that story gets on the air, to say ‘this is what that looks like,’” Dawson said. “Why are we telling the story this way? Are we trying to demonize someone?”

Eric Ludgood, another one of the guest speakers and assistant news director for Atlanta Fox affiliate WAGA-TV, told Murray he had to be passionate about his work in order to truly succeed.

Murray said it can be scary and hard overall to try to get your foot in the door and understand the information.

“If you talk to 10 different people, you’ll get 10 different stories about how they got where they got to,” said Tolly Carr, one of the guest speakers and a managing partner for HBCU Gameday. “Have you thought about doing anything original just on your own?”

Carr started in TV  and did stories he knew would never be on air.  He wrote them like they were real and gave them to news directors. Over the course of a couple of months, Carr said he wore down the director to accept his work.

“Even though it’s not given to the masses, that’s still experience under your belt,” he said.

Each interaction with the panelists ended with encouragement and connections made. By the end, Murray said he felt like he was talking to his professors and mentors. The conversations he had, which let him peek into different experiences, showed him kindness  and demonstrated success through hard work. It was what he needed, Murray said.

“Everybody here, even though they accomplished so much, they were so approachable,” Murray said.

Ludgood, in particular, had told Murray it was OK to want dreams and that Murray could make them come true.

Murray aspires to write for television.

Murray held onto that message.

“He showed me that you can be yourself,” he said.

For those who were unable to make it, take a look at the June 1 event through the gallery below:

How long have you been a member of AABJ?

Where did you attend college?

How long have you lived in Atlanta?

I moved here in May 2016, so just passed the three-year anniversary.

What do you like most about being a member of AABJ?

I love the community and the mentorship opportunities.

What initially got you interested in the media/communications field?

My church back home runs a summer camp all about multimedia where I was able to get my hands on video and editing software at a young age. I’ve been all about media ever since.

What are your favorite publications/outlets to get your news?

I like to start the day with the daily podcasts from NYT, BBC, and others. I also keep up with AP alerts for breaking news updates. For perspective content, I think NPR does a great job.

Is there anyone in media you look up to? Why?

I looked up to Ed Bradley on “60 Minutes” as a kid. Now I admire my peers that create culturally relevant and informative content; folks like Wesley Lowery and Justin Tinsley.

What’s an interesting fact about you people wouldn’t have otherwise known?

I shortly left the industry to teach at my old high school before I moved to Atlanta.

This edition of The Byline was edited by Amir Vera.