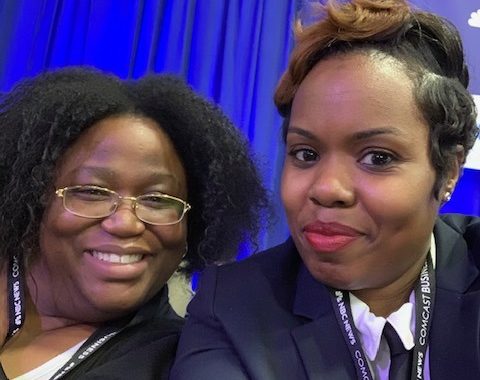 Outgoing AABJ president reflects on journey that led to her presidency

Ask AABJ President Carol Gantt how she feels about passing the leadership torch to the next president and the quick and blunt reaction you’ll get: “It’s time for me to go.”

For this south Alabama native, journalism wasn’t her original calling.

“Going in with intentions of pre-law, I got suckered into TV at the University of Southwest Louisiana (now the University of Louisiana at Lafayette). I graduated with a degree in broadcasting, after I fell in love with breaking news — like a dummy — because I was told that I couldn’t produce.”

After stints in Columbus and Augusta, Georgia, the call from CNN brought Gantt to Atlanta.

“I was in college, but had no clue what NABJ was about. It was only when I came to Atlanta and was working on the scene, I heard about AABJ. So, I went to a meeting.”

Based on that first meeting, Gantt was surprised she charted a path with AABJ, let alone leading its board of directors.

“At my first meeting, I felt like an outsider. I never felt that way before around a group of people who look like me. So, I walked away from it,” she said. “I tried it again when the national convention was here in 2005, only because I wanted to go to the convention for free. Even then, it felt so cliquish to me that I walked away again.”

Ten years later, a life changing “sucker punch,” of sorts changed Gantt’s mindset about life. Her father died in 2015 and up until then, Gantt said she was just “here on earth,” looking for what she could get out of things. It was at her father’s funeral that she realized all the things he did that she never knew about.

“It wasn’t about what he got out of things, it was what he could do for others,” Gantt said. “It was at that point that I realized that I needed to figure out what I could do to help someone else. Getting back into AABJ at that point allowed me figure out how to give back to an industry that I love.”

Gantt joined the executive board as secretary in 2015. Even then, some people had more in mind.

“Stan Washington, Jaya Franklin and Jennifer Matthews asked me to lunch one day, trying to sell me on running for president. I thought about it a little and convinced myself to go ahead and do it.”

Gantt is proud of the many accomplishments that she guided during her term, including AABJ’s documentary, “Black & Reporting: The Struggle Behind the Lens,” a sold-out Region III conference and raising a significant amount for student scholarships.

Other board members also said they’d miss their AABJ responsibilities.

“Serving in this capacity can be and is very rewarding. It is a commitment, however, that should not be taken lightly,” said Catherine Witherspoon, AABJ secretary.

Quyana Barrow, AABJ vice president of broadcast, said being on the board was an amazing experience.

“(The) Atlanta chapter has accomplished things that no other chapter has and I’m proud to have been a part of it,” Barrow said.

Although Gantt may be leaving the functions that keep AABJ running, she’ll still be around, with greater NABJ responsibilities, as the newly appointed chair of the Student Education Enrichment and Development (SEED) program, primarily overseeing scholarships.

“Passing the AABJ torch will allow me to refocus on being the best at what I need to be personally and professionally,” Gantt said. “AABJ is a great organization. We need to continue the legacy of this organization with people who not only have a passion for AABJ or NABJ, but a passion for this industry.”

Eric Nickens, Jr. is the marketing and communications director and district public information officer for the DeKalb County Board of Health in Decatur, Ga.

AABJ’s $43 for 43 fundraising campaign is still ongoing. In its 43rd year, we are asking members to donate $43 to go toward programming, scholarships, and events throughout the year. Be sure to invite your friends, coworkers and anyone you know who supports our members in print, communications, public relations, radio, broadcast, digital and the many trailblazers in the literary world. Be sure to share our campaign on your social media by using the hashtag  #AABJ43.

Imagine trying to run your own business while taking classes.

That’s exactly why everyone can’t do it, but entrepreneur and Atlanta native Mia Harden, 24, is truly an exception to the rule.

The senior at Georgia Gwinnett College runs Mia Harden Creative Inc., a business revolved around creativity. Majoring in design and production, her business focuses on brand building for other entrepreneurs while using her technological talents such as photography and videography.

Her creative talents include helping others add value to their websites, cleaning up their branding and messaging and creating logos and other professional visuals for their brands. As journalists living in the social media world, it’s critical they establish themselves as a brand and build off it to increase their opportunities. We sat down with Mia in between classes to find out more about her journey.

Hello Mia, tell us a little bit about how you entered the creative world.

“I’ve always been creative! Before digital design, I was a painter and I sold my paintings until my freshman year of college. However, I began designing things around the time of Myspace and Bebo in Microsoft Paint and my passion for digital design grew from there. Fast forward, in high school, I was required to take classes on web design, coding and Adobe programs.

“It wasn’t until my freshman year of college that I decided to get serious about my art. I started off designing on the iMac at my campus job since I didn’t have a computer with the right design software. At the time, I wasn’t necessarily thinking of it as a business. I worked two jobs during my freshman year and saved enough money to purchase a Macbook Pro. In a little less than three months, I had a pretty good amount of clients. The rest is history.”

What’s one of your most recent wins?

“It started as a food truck that turned into a popular restaurant that people from all over the country are coming to pay a visit. They provide quality vegan meals to communities that would otherwise never have these options.”

When you say, “I recently won,” was there some sort of contest?

How did it feel to win based on votes from their 285,000 followers and what did you win exactly?

“Winning for me was a super surprise, but I’ve gained many followers and notoriety. It was worth giving it another try! I was paid in monetary form as well as joined the team as one of their designers.”

Where do you hope to see yourself in the world of digital communications within the next five years?

“I see myself owning a creative agency with other designers, photographers, videographers, etc. If not, I hope to have another business that is not design, but some sort of physical product to sell.”

This edition of The Byline was edited by Amir Vera and Raisa Habersham.