Amir Vera is the newly inducted president of the Atlanta Association of Black Journalists.

With the start of a new year and decade, 2020 also brings with it a new era for the Atlanta Association of Black Journalists.

The new Executive Board was sworn in Jan. 11. As President, I can say we’re all excited about this new transition. As many of you have already seen, we’ve hit the ground running with an aggressive social media campaign on Facebook, Instagram, LinkedIn, and Twitter. One of our goals as a Board was to improve communication with members.

As far as our other goals, we also want all members to feel they’re getting the most bang for their buck. That means hosting professional and social events with other journalism organizations and having guest speakers who members can network with, making connections with people they otherwise wouldn’t have created.

A prime example is our recent fireside chat with CNN’s Southeast Region Newsgathering Director Erica Henry, who spoke with members about mentorships and negotiating pay among many topics.

We also plan to provide workshops to members across all levels of professionalism — from entry-level to management — to help them hone their skills.

I can honestly say I’m excited about the future of this organization and I look forward to working with all of you.

If you have any ideas on how AABJ can better serve you, send us an email to aabj.org@gmail.com. Do you need to renew your membership?  You can do so anytime at www.aabj.org.

We thank you for your continued support.

AABJ board members sworn in

On Jan. 11, AABJ held its swearing-in ceremony for its new board at WSB headquarters in Midtown. Leading up to the ceremony, the board shared their bios on AABJ’s Instagram page. To read more about the new board members, visit www.instagram.com/aabjorg. 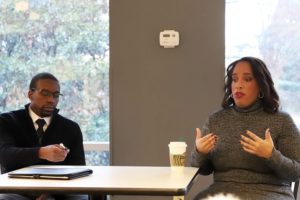 AABJ President Amir Vera and Henry had an open conversation on a variety of topics including mentoring, business relationships, management, salary negotiation, internships and even paid time off.

Henry originally studied history in college but entered journalism after working at NBC in New York City shortly after graduation.

During the conversation, Henry stressed that building relationships, finding mentors and networking are very important to a successful journalism career.

“It’s very important to maintain your relationships with your mentors because I don’t want to feel that every time I call my mentor I’m calling them because I have a problem,” the Duke University alumna said, adding her relationship with her mentor helped paved the way to a career in management at CNN.

“I have had help along the way. I think when I picked my mentors or when they picked me, it was organic,” Henry said.

Henry also emphasized that mentorship is a two-way street, delving into the story behind her own mentor-mentee Ila Wilborn, who was also at the meeting.

Wilborn, a production assistant for CNN Newsource and an AABJ member, said her mentor-mentee relationship with Henry is special. She credits Henry for her success at CNN.

“It was like she really is somebody that cares about what she does,” Wilborn said. “That was something I saw in her and I wanted that for myself.”

Henry also discussed salary negotiations and urged attendees to do some research instead of taking the first offer. One thing she did was ask friends living in Los Angeles, where she was first offered a position at CNN, if she could live off the salary first offered to her.

The experience taught Henry how to negotiate for things beyond salary: “Negotiation is more than just money, it’s time off,” she said.

Later in the meeting, Vera opened the floor to questions from AABJ Board Members and attendees, including one about the controversy surrounding CBS news anchor Gayle King.

Some online critics questioned the timing of King’s question so soon after Kobe’s death and others went as far sending King death threats.

“When we signed up to be journalists and to be reporters and correspondents 15 years ago — we had no idea that getting death threats would be a part of your daily life,” Henry said.

Adelin Gasana, a documentary filmmaker and producer, who attended the meeting said Henry gave interesting tips and left him inspired.

“I’m always looking for new ways to grow. The conversation of salary negotiations or paid time off negotiations with an employer that’s offering you a job or an advanced role – that was insightful,” Gasana said

“Erica talked a lot about having confidence in yourself,” Clark said, “and at the end of the day, if you do not have confidence it’s kind of hard to accomplish some stuff.”

Alexis Grace is a senior at Clark Atlanta University. She is also president of the school’s NABJ-CAU chapter.

Vox Media, Inc is looking for a *remote* race reporter. Five years of experience required. For more on the position, visit here.

Any fluent Spanish speakers looking for a TV gig? CNN Español is hiring an associate producer to aid line producers and assist with shows. Learn more about the position here.

CNN Digital is looking for a senior news editor to help run their national news desk. At least 6 years of experience required. Fore more on the position, visit here.

AABJ is hosting its first mixer of the year Feb. 20 from 6 to 8 p.m. at 55th & Park, located at 55 Park Place NE. Active AABJ members can attend all social events for free. Entry is $5 for nonmembers. And don’t forget your business cards!

This edition of The Byline was edited by Raisa Habersham and Tianna Faulkner.